Why and how to use Google App Engine to host static / multi-page sites.

It seems that Google App Engine has a bit of an image problem. I often hear it mentioned when discussing JavaScript heavy single paged web apps, such as Gmail, but it’s less likely to be considered as a place to host static, or traditional multi-page sites.

Apart from the obvious benefits such as being able to scale via Google’s infrastructure, probably not the first concern for a simple static site, here are some benefits applicable to simple hosting.

So if it’s so good, why isn’t everyone using it? Well here are some cons when considering GAE for static sites.

Still reading? Good, let’s get down to a quick step by step tutorial for hosting your new website! Register a new application

To create a new place to host your site you need to sign up to GAE at https://appengine.google.com/ and hit the create new application link. Once created take note of your application id, such as ‘mystaticsite’ which we'll use in this example. Install the SDK and Python

You need to make sure you have python installed for your platform, and then download the GAE SDK for python:- http://www.python.org/download/ https://developers.google.com/appengine/downloads#GoogleAppEngineSDKfor_Python

Once the SDK is installed you can launch GoogleAppEngineLauncher and click File -> New Application...

In the dialog below change mystaticsite for the id of the application you registered at https://appengine.google.com/ and hit create.

This will create a skeleton project in the directory specified.

Browse to the project directory and do the following:-

Here’s how it should look. 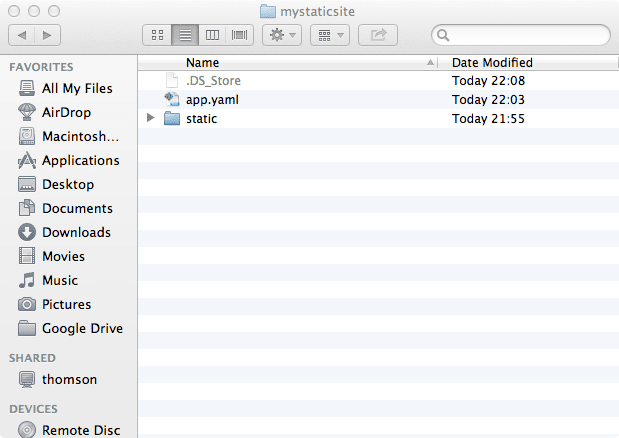 What we’ve done here is to tell app engine to upload all files in the static directory as static files, and route html requests to the static folder. We’ve also routed / to index.html as this won’t happen by default. If you have sub-directories in your site, such as a directory called styles for css files you’ll need to add the following to app.yaml, and so on for each sub-directory.

That’s it, you’re now setup to deploy your site to GAE with one click. Launch GoogleAppEngineLauncher and click Deploy. If your id is set correctly and registered it should deploy and be hosted at (swapping mystaticsite for you app id):- http://mystaticsite.appspot.com/

You can learn how to administer your app, including version control, and custom domain names from the docs here https://developers.google.com/appengine/docs/adminconsole/index